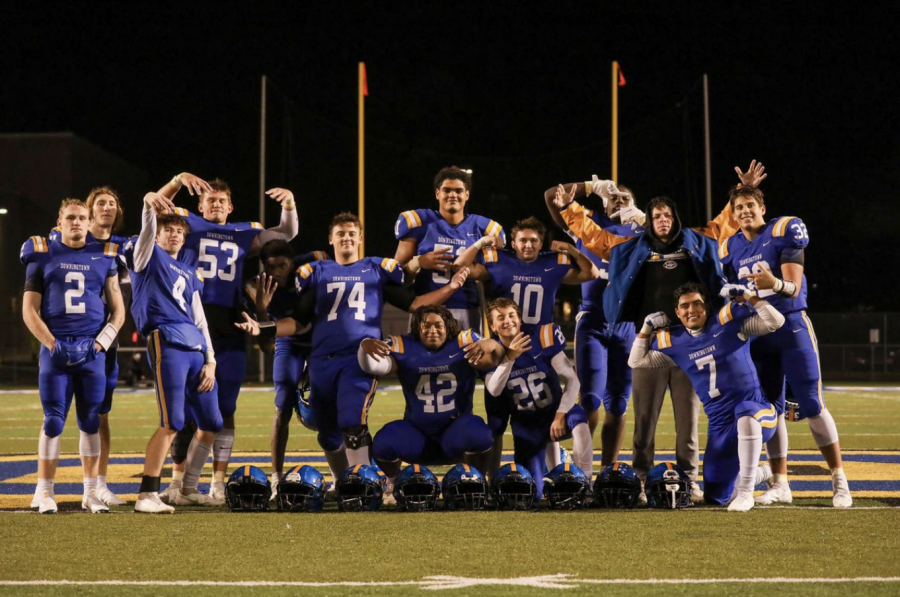 Senior strong! Whippet football players from the Class of 2022 gather on the field for post-game photo.

A team above all–above all, a team. This year the Downingtown West Football team had a tough season. They ended their season with a 5-5 record, unfortunately not making the playoffs for the first time in several years. However, each player was determined each and every game to fight for their team. When playing rival Coatesville, for instance, they played a hard fought game, but they were defeated within the last few seconds of the game with a final score was 31-28. A few weeks later they played Downingtown East. This was the biggest game of the year–the Battle of the Brandywine. The energy within the stadium was something different, and the Whippets started off strong in the first half but sadly fell to East within the second half. The final score was 35-28.

The boys then closed the season out by playing Avon Grove at home on senior night. Though it was a rainy night, they didn’t let this take away from their last game. They ended their season on a high note, winning with a final score of 33-6. When asked about the season, Will Mahmud (‘22) said, “Every year at West football is a great year. Although we may not have gotten the outcomes we wanted, I’m really proud of how the team overcame tragedy and adversity and really battled the entirety of the season.” West football went into this season as a team and came out as a family, fighting till the end, and always having each other’s back.  We are already looking to the future of West football and can’t wait to see next year’s team take to the field in the fall of 2022.