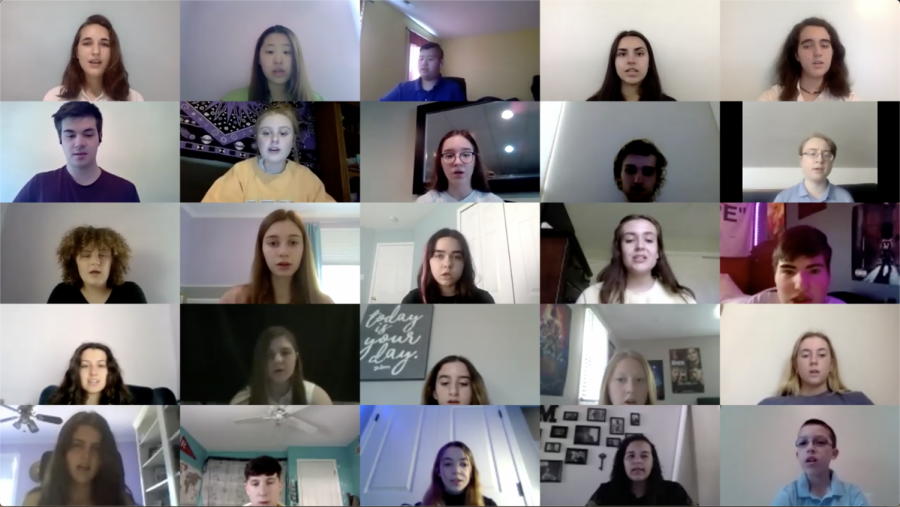 In true 2021 fashion, the choir classes utilized Zoom to record videos for their spring concert.

Here at West, the band, orchestra, and choir classes have worked hard the second half of the year to produce both in-person and virtual concerts for their friends and family during the last weeks of school.

The concert band put on an in-person concert on Monday, May 24. They performed several pieces, including “El Camino Real,” “Choreography,” and the James Bond classic “Skyfall.” This was the band’s first in-person spring concert since the outbreak of the COVID-19 pandemic. The concert took place outside in the STEM parking lot, keeping with regulations regarding the pandemic.

The orchestra is putting together a virtual ensemble for the spring. Each member recorded an audio file on his/her own and then came together to record as a group playing on Zoom. The audio files were overlapped with the Zoom video, creating the concert. Carly Etter (‘23) said of the concert, “The best part about this was that we all had enough time individually to record it, so if we made a mistake, we could just redo it.”

The choir classes are also putting on a virtual concert for their annual performance. Concert Choir I & II, Bel Canto, Masterworks, and Vocal Ensemble are all performing this spring. The concerts were organized as such: a video recording of all the members singing was recorded over Zoom, and then a separate audio recording of everyone singing was put on top of it. Those attending school in-person recorded together, and those at home recorded individually. Although the classes have separate songs to sing, all of the classes are singing “In a Place of Miracles” from The Hunchback of Notre Dame to tie it all together.

The music doesn’t end there. The seniors in the choir will be singing a mash-up of Carly Simon’s “Let The River Run” (a graduation favorite) and “For Good” from the hit Broadway musical Wicked at graduation. What a great way to send off the class of 2021!

I know I speak for the entirety of West when I say we are so proud of the work everyone has done for the spring concerts. Thank you for letting us finish the school year on a “high note”!